On the basis of our successful involvement in the World Equestrian Games in Aachen in 2006 we were invited to furnish the musical accompaniment for the dressage tests at the next World Cup held in Lexington, Kentucky in 2010. There we provided the soundtrack for the Grand Prix tests on 26th and 27th September and also for the Grand Prix Spécial on 28th September 2010. We also scripted the freestyle music for the tournament. Once again our technical expertise and the help we provided in setting up the stadium PA system were greatly appreciated by our American hosts.

At the close of the dressage competition Sherry Frank, sports director of the World Equestrian Games, took the time to thank us personally for the excellent teamwork and accomplished musical and technical support that we provided in Lexington. In total, E MEDIA DESIGN provided the musical accompaniment for no less than 95 rides in the Grand Prix and Grand Prix Spécial tests in Lexington over just three days. NBC broadcast our music live for nearly 15 hours and made sound and pictures from the tournament available worldwide. During the course of the event the commentators kept referring positively to the quality of the musical accompaniment 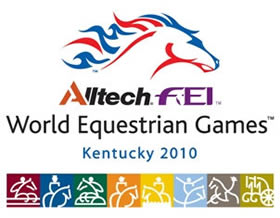 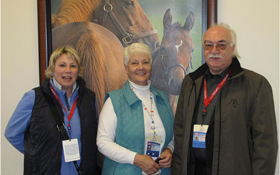 Sherry Frank, sports director of the World Equestrian Games in Lexington, thanks us at the close of the dressage competition for the excellent collaboration and accomplished musical and technical support.