The world’s biggest equestrian exhibition, EQUITANA, held biannually over 10 days at Essen Exhibition Centre, Germany, attracts hundreds of thousands of visitors every time. One of the main attractions of EQUITANA, alongside the daytime programme in the large show arena, is the HOP TOP Show that takes place four times over the course of every event. For many people this equestrian musical is still considered to be one of the best horse shows in the world.

Our music has always been an integral part of the event, adding to the drama for spectators whilst also supporting the different acts and performers in the arena.
Since 2005 we have also worked on other evening events that make up EQUITANA – such as the stallion show, HENGSTE, and the different training evenings that are held. 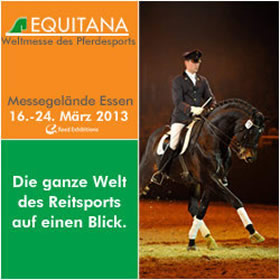